skip to main | skip to sidebar

He blew his money on castles and cars and now he blames his manager because he can't afford back taxes?

Levin's 12-page complaint continues: "As Levin sold off automobiles, Coppola bought new ones. Then, cross-defendant set off on a spending binge of epic proportions, and by July 2008 Coppola owned 15 palatial homes around the word; four yachts (one for the Caribbean, one for the Mediterranean, one for Newport Beach and one for Rhode Island); an island in the Bahamas; a Gulfstream jet; and millions of dollars in jewelry and art."

He claims Cage did not just ignore his warnings, he "rebuked" him try trying to control the squandering. "The pinnacle of Coppola's spending spree came with his quixotic acquisitions of Midford Castle in England and Schloss Neidstein Castle in Bavaria." Levin says he warned Cage that both castles were "decrepit" and needed "huge expenditures just to make them habitable," and that Cage didn't have that money, but the actor "ignored Levin's advice and bought both castles anyway."

Herb Butler has left the room 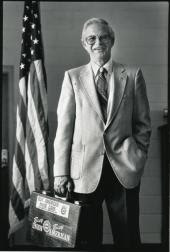 My hero, Herb Bulter, has passed. He was on of the nicest, most helping soul on the planet.


His son summed his father up best:

"He was not an egomaniac," his son said, "but he loved attention. But in my book, he deserved every bit of it. He was quite a man."

Herb Butler knew he'd face plenty of challenges as a union organizer in the South.
But in 1946, Mr. Butler was working at a small grocery in Dallas when he was transfixed by a group of workers who shuffled into the store.

"I saw men coming in covered with cotton dust, not able to breathe," he said in a 1987 Atlanta Journal-Constitution article. "They wanted a union, but they were scared to death."

It was an image that never left him.


In 1948, Mr. Butler took a job at the General Motors' plant in Doraville. While he worked on the assembly line, he took on larger roles with United Auto Workers Local 10 and became a UAW regional representative. In 1971, he joined the UAW office as its Atlanta area director and stayed there until his 1990 retirement.

"Herb worked his way up through the ranks of the Local 10 and became such a fighter for workers' rights," said Sam McDowell of Marietta, the current UAW Atlanta area director.
"He had a strong reputation for defending workers and negotiating contracts," Mr. McDowell said. "When he took a position, he would stay with it. And even though he got criticized for it sometimes, I admired him for that."

Mr. Butler learned to brace himself for the bruises he inevitably suffered in the sometimes combative world of labor relations.

"We had some old hell-raising meetings," he said in the newspaper article. "We knocked heads and let the chips fall where they may."

James Herbert Butler, 80, of Marietta died of complications from lung cancer Thursday at Tranquility Hospice. The funeral is 1:30 p.m. today at the Herb Butler Union Hall, Local 10, on Buford Highway in Doraville. Benson Funeral Home is in charge of arrangements.

Mr. Butler spent decades traveling the East Coast, assisting with union-management negotiations, helping to resolve grievances and acting as a middleman between union headquarters in Detroit and the Southern unions his office represented.

"His main driving force was just a desire to help working people better their lives," said his son, Jim Butler Jr. of Edgemoor, S.C. "And he was all for keeping manufacturing jobs in America for American workers."

Mr. Butler drove Buicks, kept a "Buy American" pin attached to his union cap, and served as a 2004 Georgia delegate to the Democratic National Convention. A supporter of Sen. Hillary Clinton's presidential campaign, he met her during her recent campaign stop in Atlanta.


Even at home, Mr. Butler surrounded himself with miniature cars, campaign buttons, union memorabilia and books on politics.


"He set up his basement basically like a labor museum," his son said. "It's a funny way to relax if that's your job, but that's how much he loved it."


Mr. Butler was "shocked and thrilled," his son said, when Local 10 union hall was named in his honor in 1983.


"They had a big barbecue and his mother and father got to see it dedicated to him and he got to give a long speech, which he loved to do," his son said.

"He was not an egomaniac," his son said, "but he loved attention. But in my book, he deserved every bit of it. He was quite a man."
Posted by Vicki Pierce at 10:36 AM 2 comments:

Yid Vid: She's Got a Crush on Ann Coulter

Posted by Vicki Pierce at 1:04 PM No comments:

Posted by Vicki Pierce at 10:32 AM No comments:

Carol Burnett to Harvey Korman, "Where did you learn to practice law, the White House?"

Posted by Vicki Pierce at 2:29 PM No comments:

Throw her into an institution

Just throw her into an institution? This is cooperative parenting? This is in the best interest of the child?

"Dear Mom...I had to go to Susan Boyans EEEEEUUUU!!!! She said that you had a sickness. I yelled at her alot and said she was lieng and eager for money. She said I was desparate. So I yelled at her more. Then she said if I did that more I would be put in an institution so I stopped."
Posted by Vicki Pierce at 2:33 PM 1 comment:

Should state pay for divorce lawyer?

Brenda King stood in divorce court, completely unsure about what she was legally allowed to do or say to help show she should have custody of her children.

As a high school dropout with a GED but no legal training, she didn't know what evidence was off-limits. She didn't know when to object. She hadn't subpoenaed witnesses, and she had the uncomfortable task of having to cross-examine her former husband and his new girlfriend.

"I'm a good mother," the Everett woman told the judge, whose patience had worn thin. "I'm a lousy lawyer."

On Thursday, the Washington Supreme Court will hear arguments about whether people who can't afford a lawyer for their divorce -- particularly when children are involved -- should be given one at public expense.

In the trial, she claimed he had anger problems. He claimed she was mentally unfit. In the end, Michael King won custody of the children, leaving Brenda King -- who'd done most of the caring for the children -- limited to seeing them every other weekend.

The outcome devastated the woman, said attorney Katie O'Sullivan, whose firm, Perkins Coie, is now representing her for free.

"This case is an effort to get her a new trial, with a lawyer, and an opportunity to have both sides of the story told," O'Sullivan said.

She contends that people in Brenda King's situation have a right, under the state constitution, to have an attorney represent them in court.

Brenda King could have used some help from the Minnesota Judicial Branch. Too bad she didn't live there.

If all else fails go pro se when you live in Minnesota.

Courting the boom of do-it-yourselfers

As more people are handling their own legal cases, Minnesota courts try to find more ways to give them a helping hand.

Dana McKenzie was busy Thursday dispensing free expert advice to a bunch of do-it-yourselfers. But this wasn't a hardware store, and they weren't learning how to replace a faucet.
They were at the Ramsey County Courthouse, finding out how to represent themselves in court in family-law cases -- divorce, child support and child custody.

Anecdotal evidence and national studies suggest that more people are going to court on their own behalf without the help of an attorney. And while Minnesota courts don't keep statistics about the number of cases involving parties that the legal system calls pro se litigants -- a Latin term meaning "for self" -- local courts are expanding efforts to meet the demand and finding new ways to help.

There are two Hennepin County District Court self-help centers, one in the Government Center and one at the family courts building.

Together, the centers helped 35,000 people last year. Many of those people, if not most of them, were there to get help with representing themselves.

With legal forms and basic information available through such centers or on the Internet, "There are very few [family-law] issues where people can't make a decent effort at doing it themselves," said McKenzie, a St. Paul family-law attorney.

Posted by Vicki Pierce at 10:37 AM No comments: